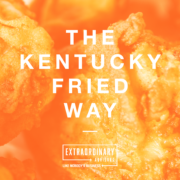 One of the most important lessons that entrepreneurs can learn is that there is no straight line to success. The line dips and twists and turns, often doubling back in what we might call “failures” but what we should think of as valuable lessons. When entrepreneurs fail forward, they bring the value of that failure with them, and use the lessons to achieve growth.

I call this the “looping line of success.” If you continue to follow my 4-step process to personal and professional transformation (outlined in my blog here), your journey to success will loop around frequently as you explore and evolve your inner dynamics.

One company that failed forward with incredible success is Kentucky Fried Chicken. The KFC story is an object lesson in re-framing failure to discover new opportunities.

Harland Sanders – better known to fried chicken aficionados as Colonel Sanders – was the founder and brand ambassador of Kentucky Fried Chicken. The Colonel was 65 years old and operating a single restaurant in North Corbin Kentucky when a new Interstate opened nearby and reduced customer traffic, forcing him to sell.

He was left with one asset – his mother’s fried chicken recipe. Harland Sanders decided to set out across the country and sell it. He hopped from one diner to the next, cooking the recipe for owners, and making enough for him to continue traveling and selling.

The Colonel was so determined that he slept in the back of his car and lived off of his meager savings and low monthly Social Security check. Yet it didn’t seem to be working – he hadn’t even made one sale. He needed to pivot and re-frame his failure to change his circumstances.

Harland Sanders used his own version of the 4-step process to fail forward and become a world-known icon. If you’re unfamiliar with my 4-step process, here’s a quick summary:

The Colonel first recognized the pattern of what wasn’t working. Frying the the chicken wasn’t enough of a differentiator in the eyes of his restaurant owner customers, so he switched to pressure frying. This process – along with the famous “secret blend” of 11 herbs and spices – imparted a unique and delicious flavor to the chicken, along with a speedier cook time.

Next, Colonel Sanders set an intention, not an expectation of what he wanted to do differently. He knew that one restaurant was a risky business model, having experienced a shutdown when a new interstate diverted his customer traffic. Creating a sustainable business stream with recurring revenue would be more likely with multiple franchised locations each paying $.04 for every chicken sold.

After that, Sanders created a strategy to break the pattern – he would take action by hitting the road to demonstrate the improved frying process himself. This allowed him to gain valuable feedback from restaurant owners and make necessary adjustments.

He learned from each new business owner and kept repeating his process. The Colonel was famously rejected 1,009 times before finally franchising for the first time in Salt Lake City, Utah, in 1952.

After 10 years, the company had grown to more than 600 franchised outlets, and he later sold it to investors for $2 million, which is over $15 million in today’s dollars. He became a salaried brand ambassador and KFC became the world’s 4th largest restaurant chain, with 20,000 locations across the globe.

Colonel Sanders is the paragon of failing forward and riding the looping line of success. He learned what every entrepreneur should learn – that every failure is a gift and an opportunity for growth. True learning comes from experiencing discomfort, but using the 4-step process will recharge your batteries so you can move forward and achieve your full business and personal potential.

Schedule a consultation today and let’s discover how to grow your business by following the looping line of success.